Avoriaz - The highest station of Gates of the Sun

Let imagine a town covered with snow, located among mountain peaks, a town without any car – it’s Avoriaz, one and only ecological ski resort in France. The motor traffic is absolutely banned here, and instead the streets are full of skiers and horse-drawn carriages or sleighs. The network of lifts enables you to reach every place having your skis on actually from the very moment you leave the hotel.

What else makes such an impression on tourists? A precipice, on the edge of which part of the residences is located, as well as the amazing futuristic architecture of the buildings, which looks a bit like multi-storey hives. It was designed in the 80s, by the architect Avoriaz, after whom the town got its name. It was the time when the Gates of the Sun (Les Portes du Soleil) were established, linking Swiss Morgins and Chamery and the French La Chapelle, Morzine and Chata.

Avoriaz is the highest located resort among all of the Gates of the Sun (1800 masl). The Gates are located on the Franco-Swiss border, south of Lake Geneva, which can be seen on a sunny day, just as the Mont Blanc or neighboring mountain range, Dents du Midi. The resort is located in the middle of the mountain range and includes 12 ski resorts - 8 in the French Haute-Savoie and 4 in the Swiss Valais. On the lower ranges there are dry ski slopes, while on the higher the real snow is simply always. Skiers will find here even 650 km of pistes (29 black, 110 red, 109 blue, 41 green), which guarantees them a time filled to the brim. What’s more, there are also 209 lifts and 180 km of ski trails waiting for them. About 17 o’clock the last lifts are closing, so remember to make the best of it until this time. 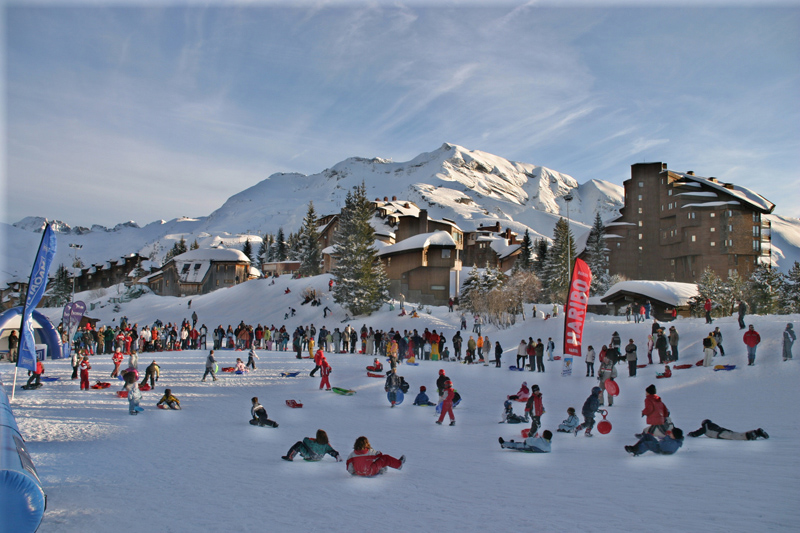 It is a paradise for skiers. Those, who like to feel the wind in the hair, sharp swerves and speed will be delighted by the pistes on the slopes of Les Hauts Forts. Stade d'Arar, Cope du Monde or Crozats are listed among the best ones. French pistes of Col du Foret and Col du Chavanette will also make an impression, and some will probably be tempted by the Swiss side of pass, which can be admired from a chair lift gliding over the famous Mur de Chavanette. If not only for "trying the snow of Switzerland", it’s certainly worth to ride a 12-kilometers long Grand Paradis to Champery at least for the views. And on that occasion benefit from the local pistes, especially those around Chatel and Linga.

What’s more, in the Avoriaz, at the central green piste Boulevard des Skieurs, those tired of skiing can enjoy 24/7 cafes and restaurants. Sitting there with a cup of hot tea in your hand, you can watch the kids skiing on a bunny slopes and admire those going crazy on half pipe and in ski and snowboard fun park. The resort for years has enjoyed the popularity among snowboarders - here is d'Arare, great for experienced ones, but also Snowpark de la Chapelle, where less-experienced can as well show what they’ve learned.

It is true that it’s not allowed to drive a car in the town, but about 300 meters from the resort there’s a car park where you can stop. It’s an open parking, and costs about 65 € per week. It is very close to the lifts from here, the views of the majestic mountains are amazing but the conditions of the accommodation are pretty harsh. So if apart from having a place to park your camper, you also want to have the access to variety of attractions, it is necessary to park a bit farther from the resort. If you are going by a car, book a parking space in the resort in advance, you can do it online through the website: http://www.avoriazparkings.com/avoriazparkings/debut.php?lang=en.

The town tempts mainly with ski offer, but the enthusiasts of other attractions will not be bored here. Those, who want to bowl, can go to Place des Dromonts, while squash adherents to Ecole de vélo et bicross rustine. For about 54 € you can dive under the ice (after training and renting the equipment), a half an hour of hang gliding costs 69 €, while the same time in the balloon costs 92 €. For about 14 € you can buy a 6-day skipass for the Gates of the Sun - a card that allows an unlimited use of the ice rink, gym and fitness area.

Tourists can also go to Aquariaz Water Park, one of the biggest and highest situated objects of this type in the world. They will find many beautiful plants and picturesque mountain scenery, but also the motivation to care for the environment. Apart from that, there is a lot of pubs, bars and discos in the town, which will surely please the younger tourists.

In the south of Austria there’s a place with perfect conditions for winter sports, and the sun that shines especially... more

The largest ski resort in Norway, Trysil, attracts tourists with the finest ski runs in the country and the most beau... more

In Zakopane you can buy “ciupaga”, in Krakow Wawel dragon figurine, on Baltic Sea ​​amber jewelry while in Swiss Mürr... more

How to warm-up and stretch before hitting the slopes

Skiing is a very emotional and exhausting sport, especially when we give everything from ourselves on the slopes. It’... more

In Poland the word „bania” may be associated with being…drunk. But this article certainly isn’t about promotion of sk... more