After a decent rest, it’s time to move forward with the trip. This time we’re heading to the capital city of Canada, Ottawa. It’s approximately 200km away from Montreal, and en route we pass many interesting, and worth knowing places. One surely must stop at Vanleek Hill, which annually hosts few nice festivals. Step-dancing and Squaredancing Competition is held here in July, in August - Vankleek Hill Fair, while Victorian Christmas Home Tour is organized in November. It’s worth noting that the latter festival is connected with city’s major attraction – impressive Victorian houses. Tourists are also attracted by beautiful murals, which can be seen on the historic buildings facades in the city center. 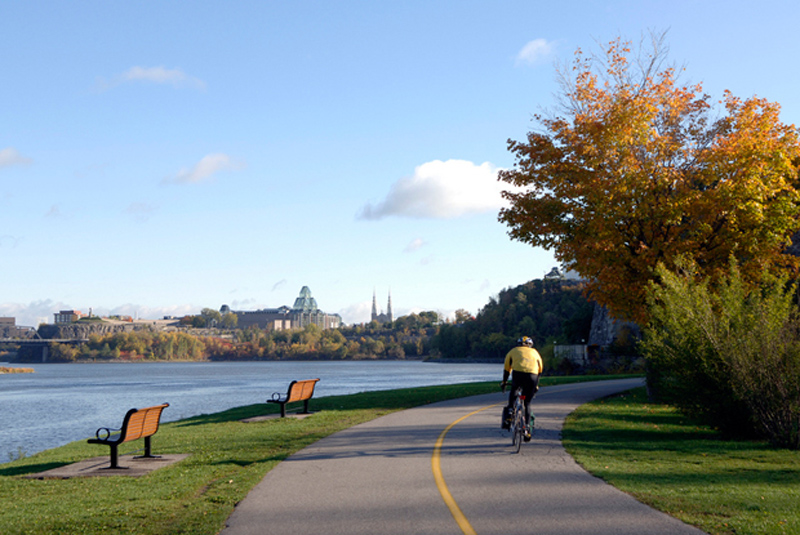 Another stop en route to the capital is in Hawkesbury. If someone likes to play golf, or is willing to learn how to play, there’s Hawkesbury Golf & Curling Club waiting for him. If you, in turn, want to eat something delicious, you will find a plenty of well recommended places around here. For a light lunch it’s best to go to Bakery Le Petit Pain – the café is so popular, that tourist often face many problems in finding even one free place.

About 33 km farer, over the river (on which Long-Sault Bridge is located) there’s Montebello, a charming town with exceptional hotels. Because we travel with a camper, we don’t need this kind of accommodation, nonetheless it’s worth at least to pull down when passing the town to look closer at this beautiful buildings. Every visitor’s eye is caught by Fairmont Le Chateau Montebello, a luxurious hotel advertising itself as “family friendly”. It’s hard to say, which adjective suits it better – “enormous” or “climatic”. Gigantic fireplace in the dining room, which makes us feel like in the place built by some giant, swimming pool, SPA, sailing boats rental services – in a word, everything you could expect from a 5-star hotel. Equally beautiful is Auberge Montebello, which resembles a castle and dignified Domaine Montebello. 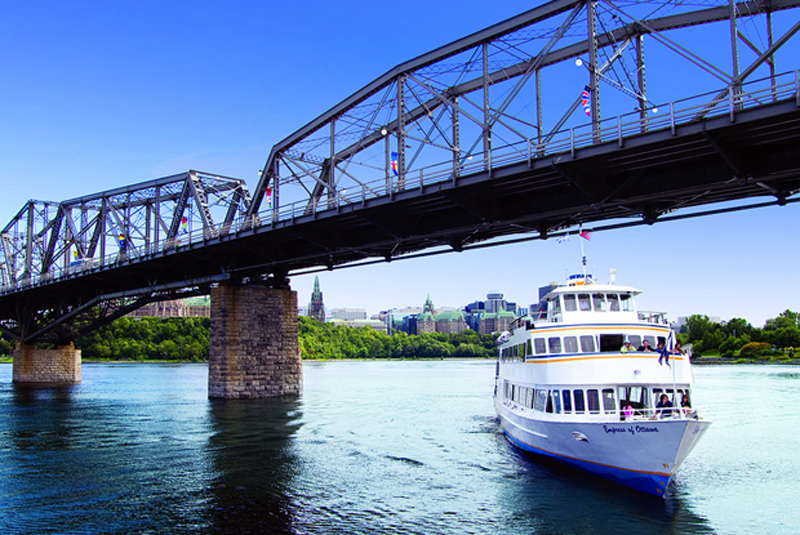 If someone, on the other hand, would like to travel along the other side of the river, should focus on one curious place. It’s Evergreen Camping & Resort (5279 Chemin de Comté 17 Alfred), a family campsite covering an area of 50 acres of juicy greenery. The prices of double occupancy for two adults oscillate around 35-50$, and guests have at their disposal a swimming pool, restaurant, small store and a picnic tables arranged all over the place.

Meanwhile we’re continuing our trip to the capital, and en route we make a stop in Papineauville, beautiful, green corner located in the little bay. Being here, you necessarily should go to the Parc du moulin seigneurial Papineau – a park with a breathtaking view of the river and ruins of the old mill. Equally interesting is solar clock, located in the Parc du Cadran-Solaire. It’s located precisely on the 75th meridian, and apart of indicating time, it also serves as the local attraction – it looks like a modern sculpture.

Ottawa - a capital city of the giant country

Finally we reach the capital city of Canada – Ottawa. It impossibly attractive city , tempting with a number of museums (e.g. the Canada Science and Technology Museum) and galleries, as well as beautiful and extensive park. Gatineau Park covers an area of 361 km², in winter it attracts skiers, in fall tempts with the spectrum of colorful leaves, while in the summer it’s a place of doing sports, such as swimming, bicycling, or mountain climbing. The area of the park is crossed by numerous path trails, while the abundant flora is a home to plenty of birds and mammals species.

Another noteworthy place is the Notre Dame Basilica in Lowertown. It's a giant temple with the interior sparkling with gold, a dome resembling a starry sky and rows of pillars stretching far into the building. Here you can really feel small. You can also go to the Parliament Library. It attracts both with the rich collection of 600 thousands volumes, as well as with its façade – its squat structure with a number of towers and ornaments was designed with a verve typical for Victorian style, also known as Neo-gothic. Equally impressive as the Library, is the main building of the Canadian Parliament, built in the Gothic style. It’s located on the Parliament Hill, and annually attracts about 3 millions of tourists.

Time for a rest

The areas around Ottawa tempts to linger on, that’s why finding a campsite close to the city turns out to be such a great idea. A noteworthy place is The Ottawa Municipal Campground (411 Corkstown Road), which is located only 15 minutes drive from the Parliament buildings. For the accommodation of 4 adults you have to pay about 50 dollars – depending on the standards. Those, who come here at the end of the May, will have the opportunity to see an amazing festival - The Odawa Pow Wow. It’s a big holiday celebrating the culture of the Aboriginal peoples, during which you can watch numerous performances, dances and various kinds of plays. It’s the opportunity to know the Aboriginal culture and try the specialities of their cuisine. The first time the festival was held in 1976, and since then it has been organized regularly.

We’re getting closer and closer to Toronto. However, by the end of the journey, we will still see a few interesting places, among which is Kinston, a city located in the place, where Saint Lawrence River flows into the Ontario Lake. The next stop is in Smiths Falls, to which we have 78km.