Smiths Falls and the riddle

Wandering in the direction of the Lake Ontario, the smallest out of the five Great Lakes of North America, we’ll pass a small town called Smiths Falls. This comely town, located in the picturesque scenery, by the Rideau Canal, attracts tourists with a big park covering the surface of over 90 hectares. You can fish for hours, play tennis, sail and or go hiking. It’s a modern place with an ambience of old town, visited each year by thousands of tourists, wanting to see the famous Rideau Canal. We’ll talk about it later. For now, you have to be satisfied with the information that it’s the town’s major attraction.

Not too far away from Smiths Falls there’s Perth, boasting of beautiful architecture of the historic downtown. Local attractions include, for example, Crystal Palace - an interesting construction built of glass, which, during the summer, serves as so-called Perth Farmers' and Craft Markets. The big part of monuments, including Perth Town Hall from 1863, is located on the island, which was created by two canals splitting the river Tray.

Among the lakes and forests – charms of Canada

Heading farther to the South on the road number 10, we’ll get to the small village called Westport. It’s a real paradise for fishing enthusiasts – the local waters are full of pikes and yellow perches. A big attraction is also an area called Foley Mountain Conservation Area, located on the top of the Rideau Valley peak. The views from there are really amazing – you can see the whole Westport, enjoy the beauty and abundance of the flora, as well as get to know numerous animals living here. The Park also encompasses a part of aforementioned Rideau Canal.

During 1,5 h drive in the direction of Kingston, we’ll meet a few such comely towns more. Whether the tine and quiet Bedford Mills, which’s a cradle of fishing, or Buck Lake, where you can meet a proudly walking elk – kilometers of paths among forests, lakes and houses scattered here and there, are waiting for us. We pass Pollywog Lake, Little Franklin Lake and numerous nameless reservoirs. The enormity of the surrounding nature astonishes and delights. Severe, juicy and virgin, but most of all, stretching to the horizon – it’s an extraordinary experience for a human being, who is rather restricted by monitored neighborhoods, or the house of his neighbor.

A trip to Kingston – by land, instead of water

When we finally reach our destination, we can answer the nurturing question. Here, the famous Rideau Canal, which is a waterway linking Ottawa and Kingston, loved by the kayaking enthusiasts, comes to an end. And who knows, maybe if we didn’t travel with a camper, the journey of our lives would be covering the distance between those two cities? The beautiful trail is recognized as the historic waterway – moreover, according to the many tourists, it’s one of the most picturesque trails of the North America. In 2007, Canal Rideau was inscribed as UNESCO World Heritage Site. It links part of the lakes and rivers, stretching along 125 miles (202 kilometers). It’s the oldest Canal of the North America, which is still usable.

We, on the other hand, drove along the waterway, right to the shore of the great lake. Kingston delights with its harmonic combination of modern center facilities and the beauty of 19th century buildings (e.g. Bellevue House, recognized as the National Historic Site). Historic districts, diverse coastline and another magnificent Canadian park – those are the major virtues of the city. A place, which is definitely worth seeing, is Port Henry (Fort Henry National Historic Site). It was established in the period, when Kingston was a capital city of Canada. Today it serves as a source of knowledge about history and culture. Fort’s staff, known as Fort Henry Guard, offer their help as guides. While exploring the site we can see fight shows, a drill and parades of youth wearing the uniforms from the past. Being here in summer, it’s worth to see the Sunset Ceremony, a solemn shows in the beautiful musical setting. However in the night, you can go to the fort, to make sure if the legends about haunting are real. But it’s not about prowling with a flashlight and avoiding guards - guided tours, so-called Haunted Walks of Kingston, are organized here.

The area of Kingston is so attractive, that there’s no wonder why so many big campsites are here. One of them is Rideau Acres Campground (1014 Rue Cunningham) located close to the lake and two charming parks - Edenwoods Park and Cecil Graham Park. It offers up to 320 of pitches with the access to electricity, a swimming pool, restaurant with the wide selection of international cuisine (including the vegetarian dishes). Within the frameworks of cooperation of the campsite owners with 1000 Islands Kayaking Company, people coming here can take the opportunity of renting a kayak, canoe or a classic boat and sail away to one of the neighboring islands. A group of four, for 1 night accommodation will pay from 32,15 to 47,30 dollars, depending if they choose a pitch with the access to electricity (50 Amp), water and other facilities. 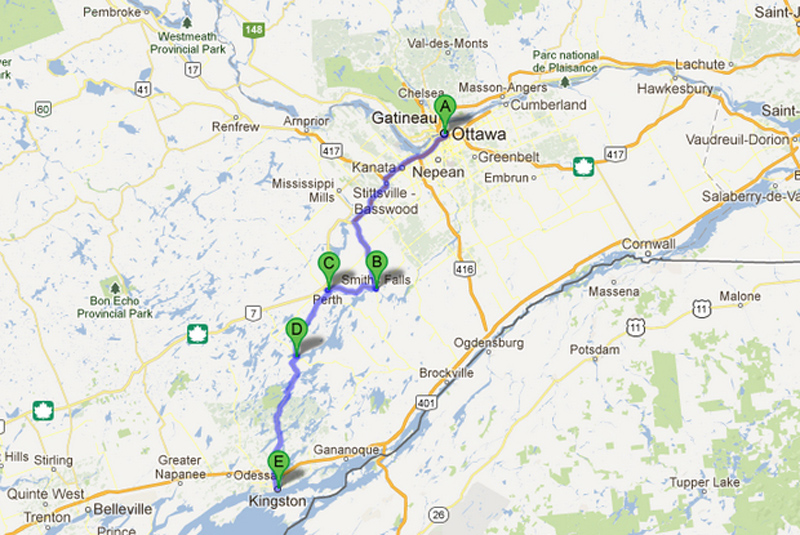 You can also stop at the campsite 1000 Islands / Kingston KOA (2039 Cordukes Road). It’s equally big, however more expensive, besides it’s not located on such beautiful lake as its predecessor. Anyways, no matter which place of accommodation we choose, the most important thing is, that we’re close to the „Thousand Islands”, and the Lake Ontario is a stone’s throw away. Apart from the fact that Kingston is the oldest center of the province, and due to the fact that it has three universities, about 25 thousands of students resides in the city. Everything altogether makes the place so special, that it’s easy to fall in love with it.

We’re going to spend some time here, because it’s really worth to. We want to visit the historical downtown with its St. George’s Cathedral and a Town Hall, Marine Museum of the Great lakes as well as numerous other attractions. The next stop not until Peterborough.